New Zealand, There and Back Again – Part 1

New Zealand – one of the most amazing places I’ve been fortunate to visit. From mountains to beaches, it has every form of landscape the world can offer.

This is a story about my trip to New Zealand in the Spring of 2015. My wife and I spent 3 weeks touring the south island. This is Part 1 of an amazing 4-part series. 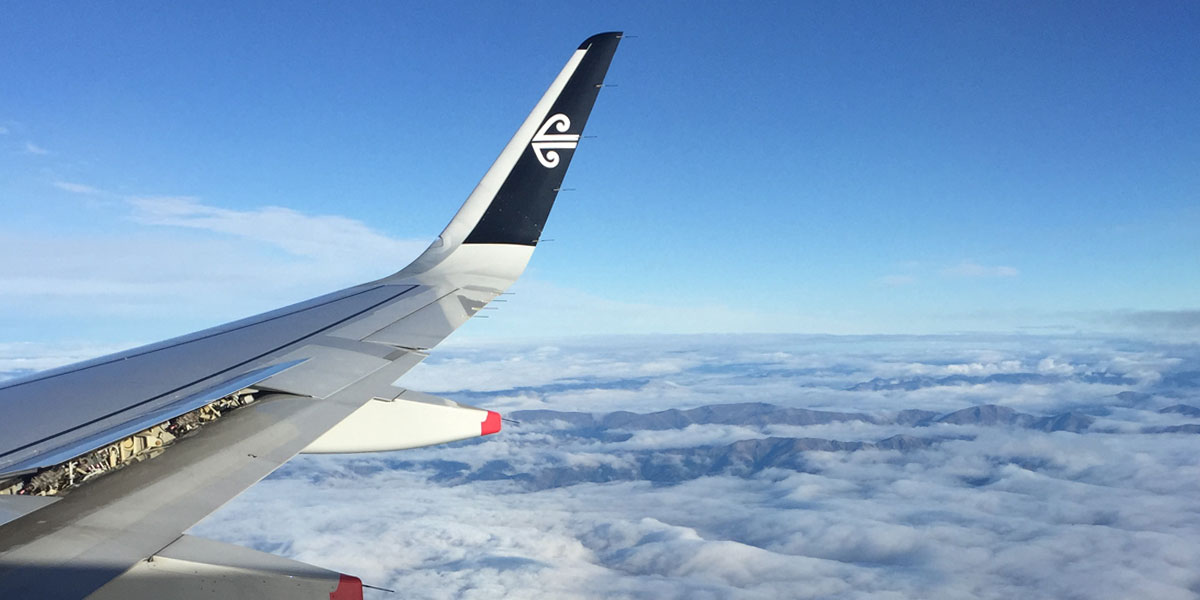 Our first day started with A LOT of travel.

We flew out of San Francisco to Auckland, which was close to a 13-hour flight. Then from Auckland we took another short flight to Christchurch (almost 2 hours) where we rented a car and hit the road. I forgot my license (oh shit moment!) so Gabrielle had to drive… but, I snuck a few highway hours in (shhh…). To be honest, she’s a good driver but she was way too nervous driving on the other side of the road… she literally drove into the grass 43 times!

The drive from Christchurch to Queenstown was very pleasant. Lots of farmland and sheep for miles. I never knew about the herds and herds of sheep in New Zealand. We’re talking thousands of sheep here! We stopped in at a local family-owned grocer for some dried fruit and ice cream. After about 6 hours of driving we finally reached our first destination – Queenstown. 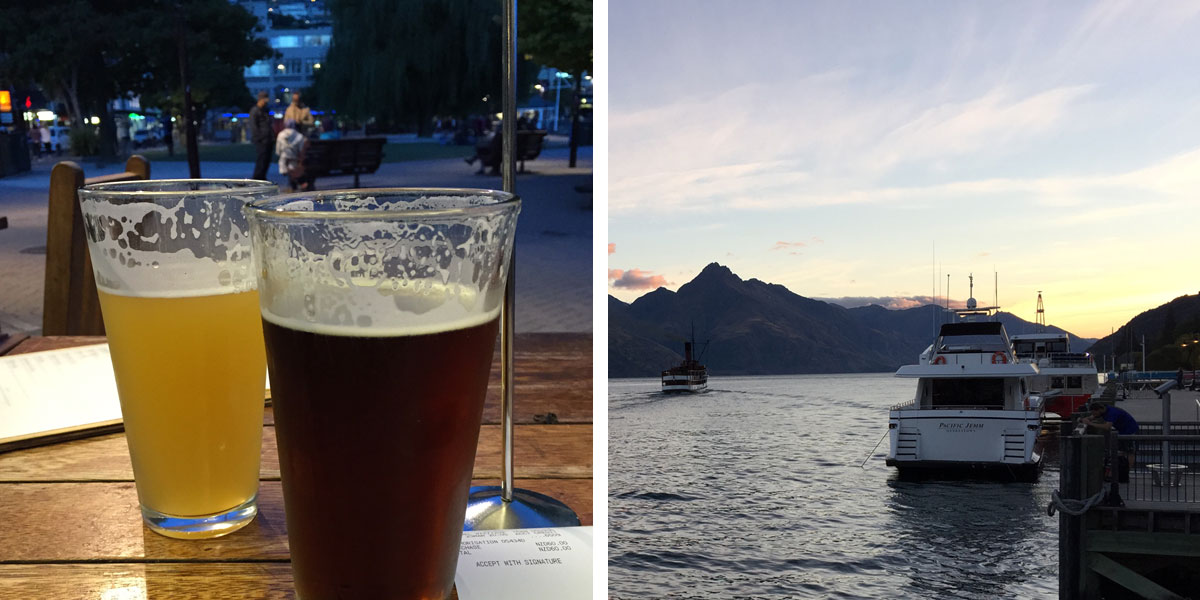 That afternoon we enjoyed a beautiful Queenstown sunset with some good food and brews. Needless to say, we were both exhausted… so in bed and sound asleep by 10:00pm (just like the states!). 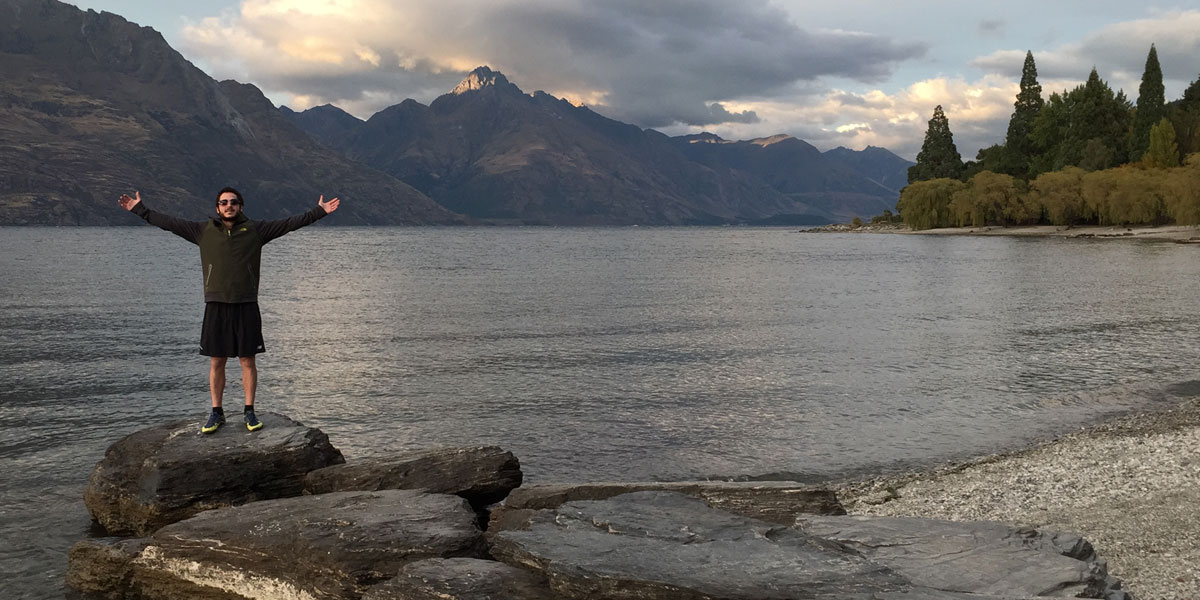 I got up at the crack of dawn, which is about 7:30pm in their fall/winter months (stays pitch black until around 8am), and headed out to the trails for a nice jog. Watching the sunrise was a real treat as it slowly rose over the Queenstown mountains. Plus, I felt like it was my personal sunrise because nobody else was awake! I also found a nice little hike for Gabrielle and I to tackle later in the day. 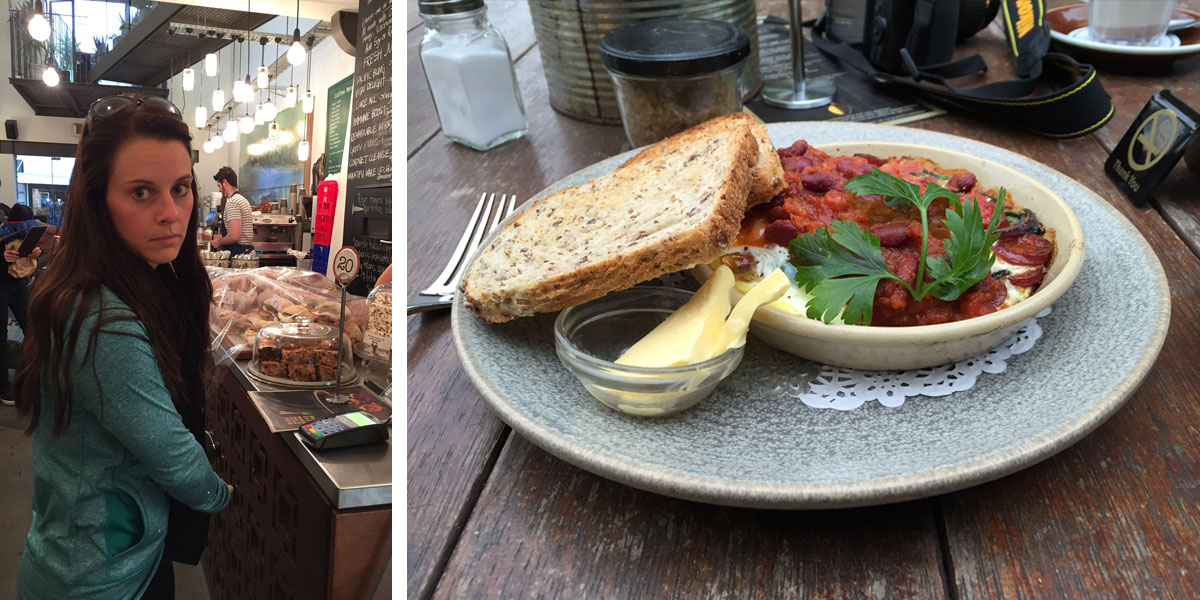 We headed out for breakfast around 9am. A coupe lattes accompanied by some Spanish eggs gave us our morning fuel. We then headed out for the hike I found to Sunshine Bay, which was a nice mix of forest trails and beach side views. Along the way we noticed several passenger vans pulled over along the side of the road with small breakfast tables laid out – this seems to be a common way for New Zealand visitors to travel and enjoy the countryside as they go. 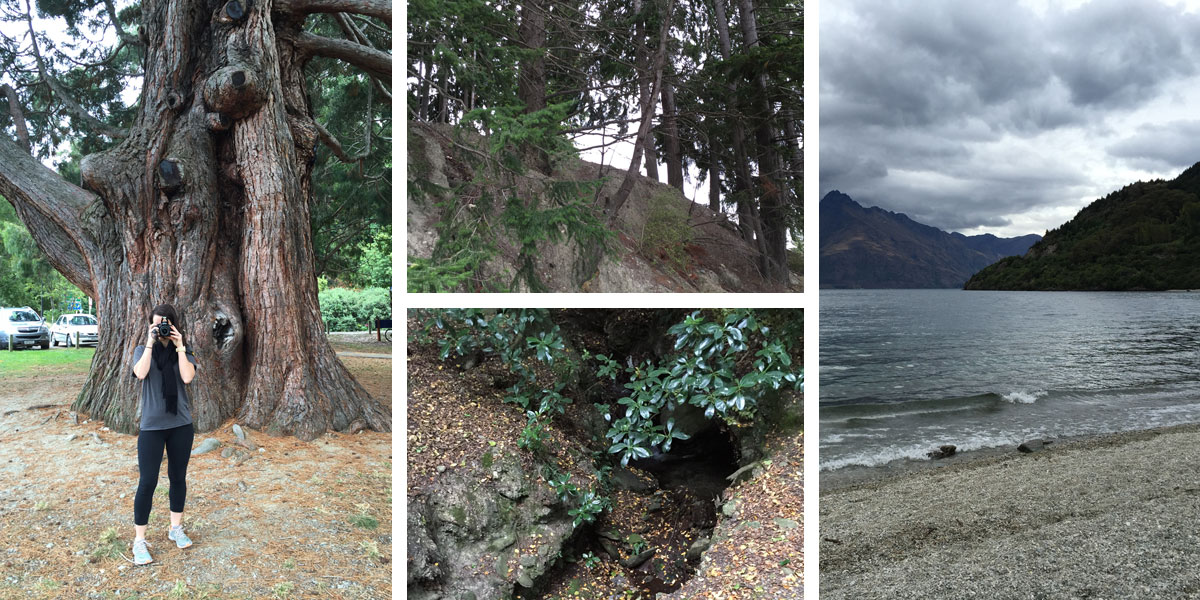 After the hike we grabbed some Turkish donor kebabs and headed up to the Queenstown Skyline gondola! At the top was a luge ride – small carts that you race down a curvy track. They looked kinda kiddy and stupid in the advertisements but boy were we wrong! We blasted down the track a couple times, screaming and zooming, and then enjoyed a beer and some views at the top. 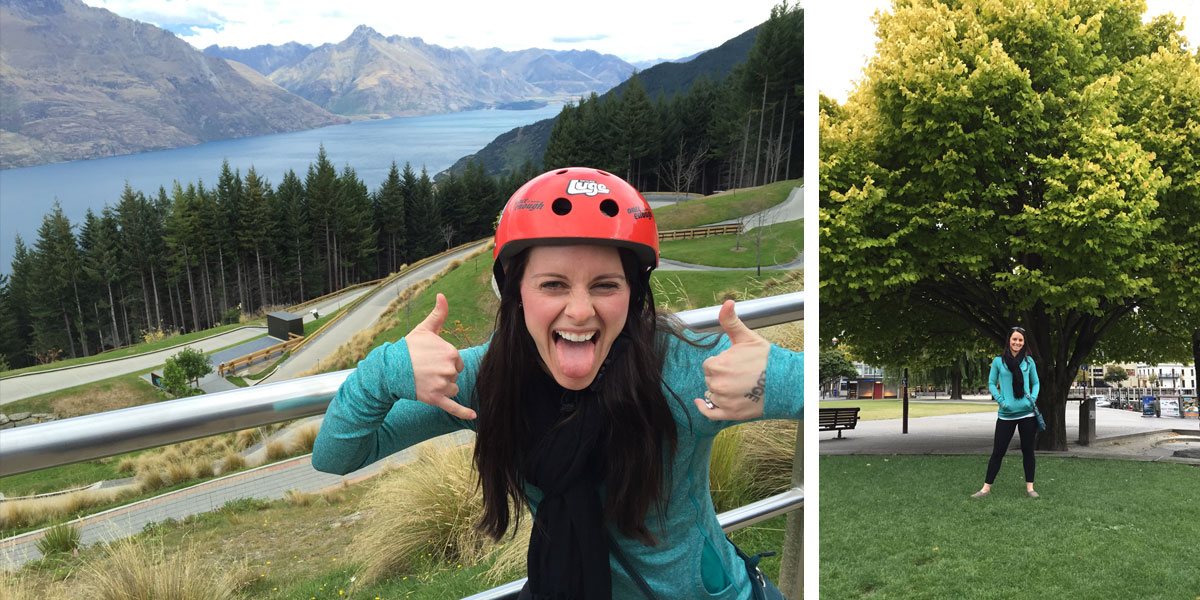 By the time we got down from the gondola we were both pooped… the jet lag had kicked in… so we headed back to the hotel and fell surrender to a power nap… which eventually lead to bed time (8:30pm – new record for me). 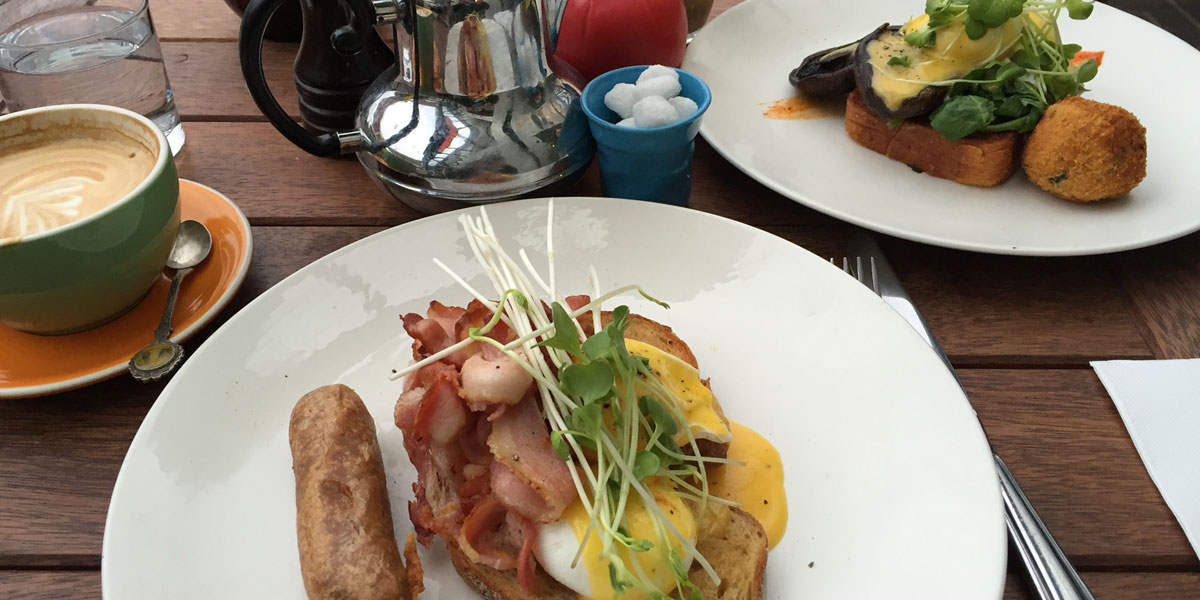 Day three started out with a visit to the local Queenstown gym for me (once again, Gabrielle was catching up on her beauty sleep!).

I got some weightlifting and a quick CrossFit workout in which felt great. Gabrielle and I then headed out in search for a power breakfast. Along the way we noticed how dead and silent the town was… literally nobody around (just like the morning before). We landed on a cute pier restaurant for some wonderful eggs benedict. The waitress asked us what we were doing up so early! We explained that in Denver we’re early risers, and she confirmed that most of Queenstown was still sleeping. 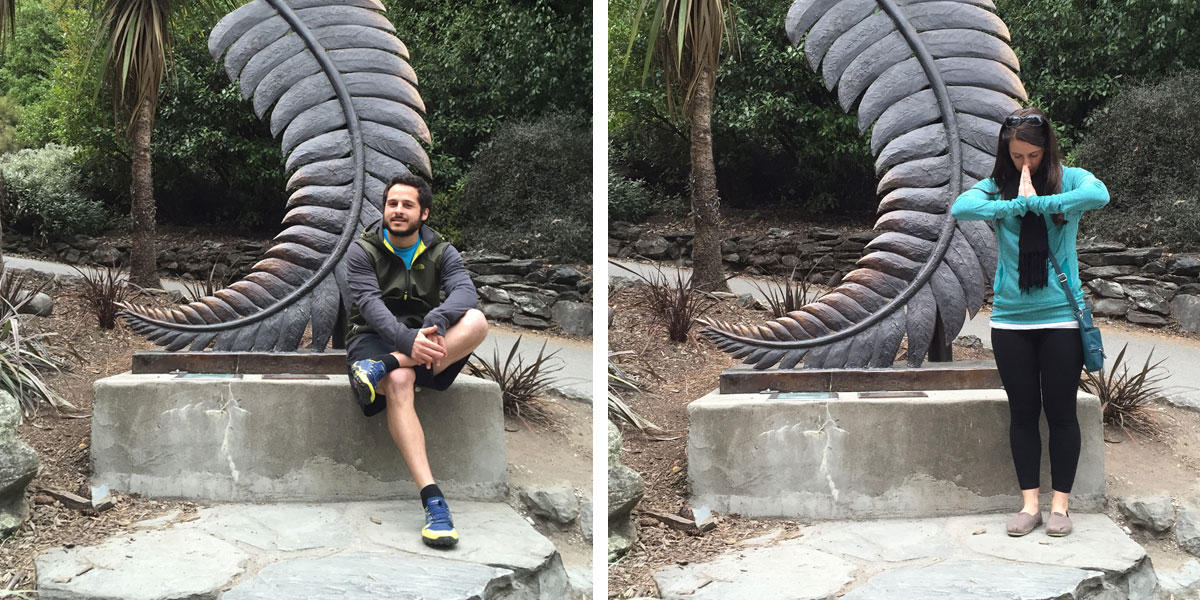 After breakfast we took a stroll along the other side of the beach and through the Queenstown Gardens. The gardens hosted some of the largest, most beautiful trees I’ve ever seen… as if they’ve been standing for thousands of years! The other side of the bay (the less busy side) was in a state of tranquility with virtually no noise and a calm wake. It was a nice break from the busy town centre. We were also pleasantly surprised by a light rain and some aggressive ducks ruffling in the ponds. 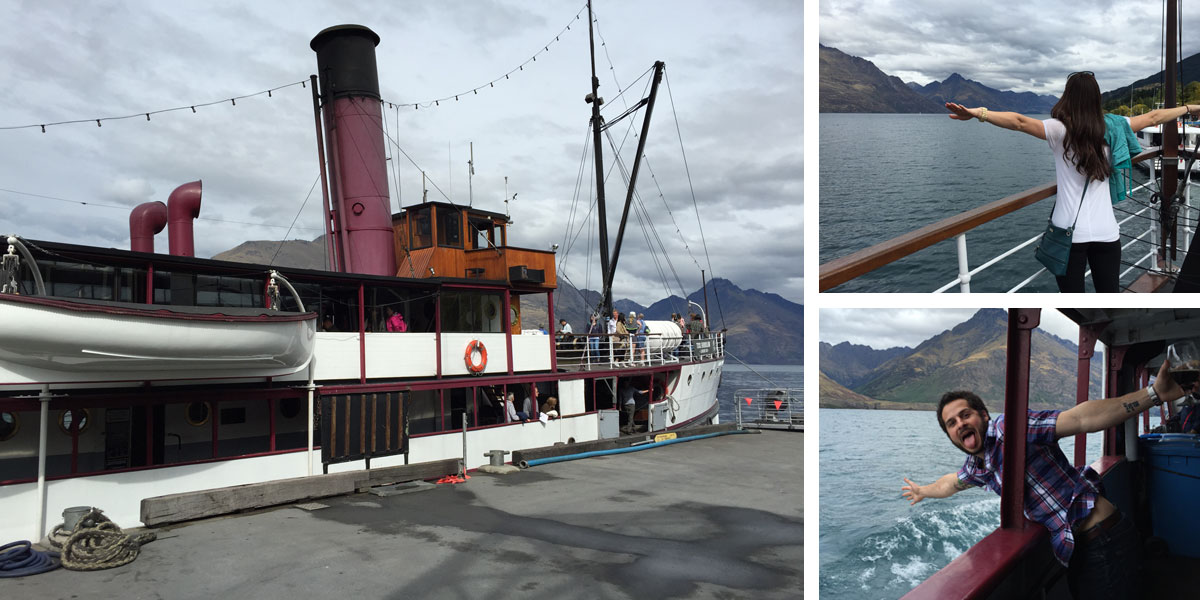 Later that afternoon we jumped on the TSS Admiral cruise.

This old ship has been sailing Lake Wakitipu for over 100 years! It’s still coal fire powered and everything. The ship took us across the lake to a small farm where we fed deer, sheep and cattle. We also got to watch a live sheep sheering and learn about the different types of wool that come from various sheep breeds. Sheep sheering is not fun to watch… in fact, it’s just plain awkward. The sheerer grabs the poor sheep and pins it on it’s booty (so it can’t wiggle away). Then he slowly shaves the sheep wool while the sheep just sits there still as a statue. However, every now and then the sheep will try to kick the sheerer which is pretty funny (I was actually waiting for the sheep to give him a nice kick in the face). 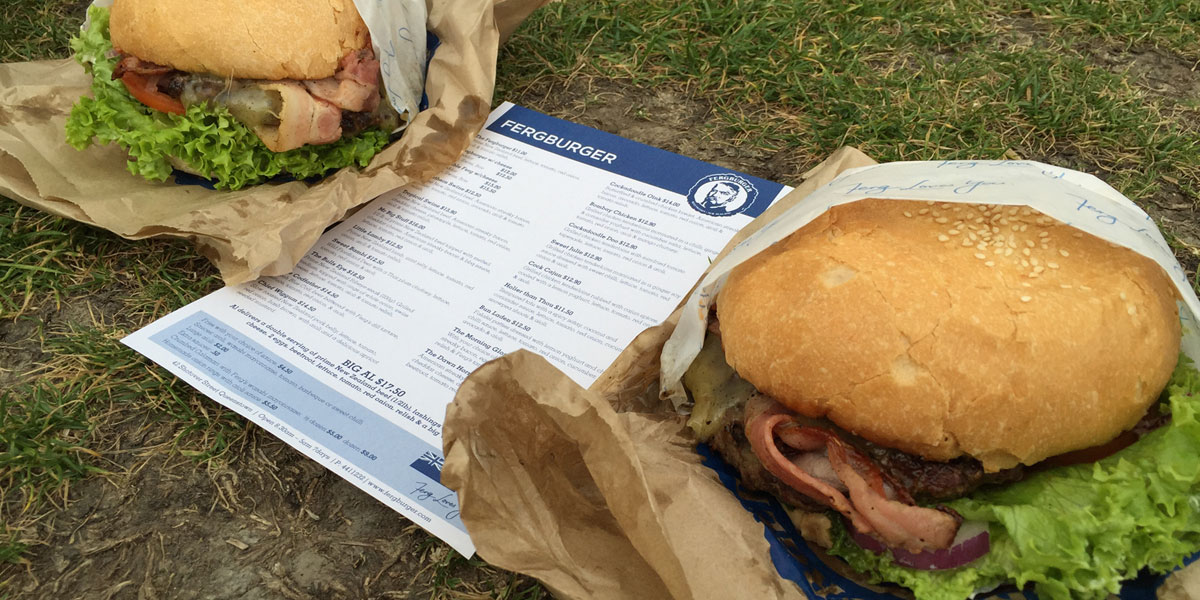 After the sheering we jumped back on the ship and returned to Queenstown right around dinner time. We already knew where we’d be eating – Fergburger. This world famous burger joint was no joke. Gabrielle and I each put down the “Southern Swine” – a 1/2 New Zealand patty loaded with bacon and all the toppings. I didn’t think she’d be able to finish it but she did! We capped things off with a little gelato and a nice stroll back to the hotel. This was our final day in Queenstown, and a great final day it was.

This is Part 1 of a 4-part series. I’ll be publishing the rest of the adventure soon, so stay tuned!