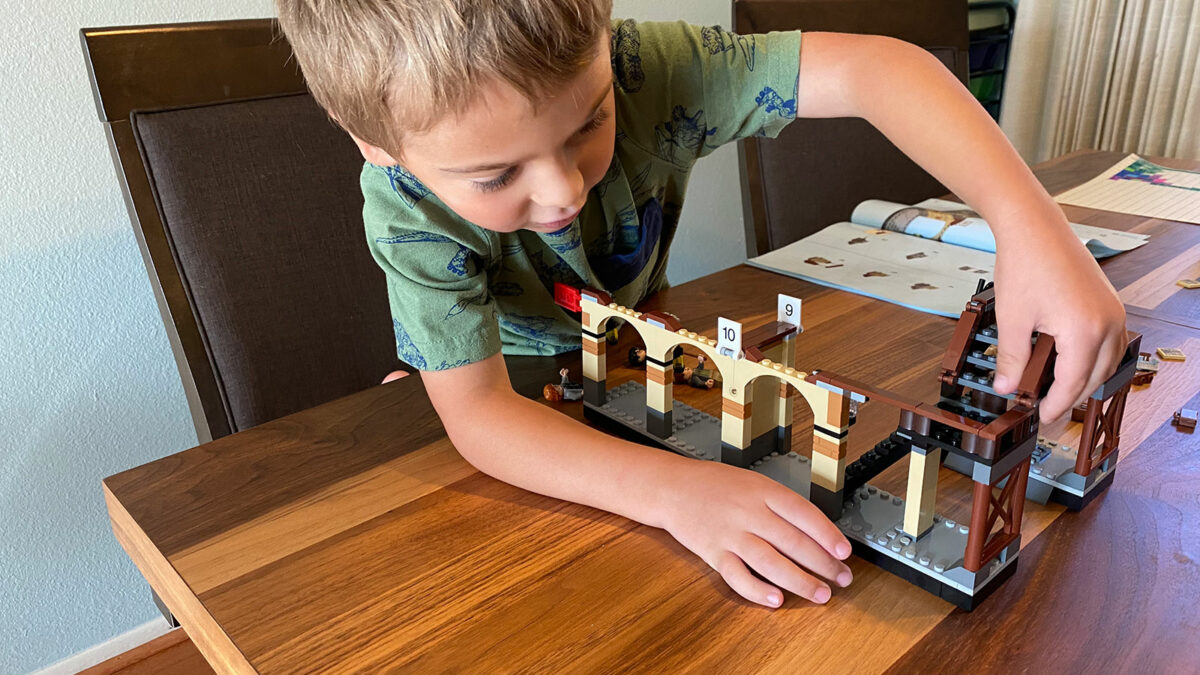 I recently got into a new lego set with my son. This isn’t our first lego set, nor will it be the last!  However, it is the first time I’ve been intentional about letting him do most of the building.

Everest is 5 now and he has new capacity for learning.  In the past I would bring home legos and do most of the building while he would watch and enjoy.  This time around he is building the entire thing while I play the coach role.  I guide the instructions, he finds the pieces and puts them together.  It’s beautiful.

Here’s where the learning comes in…

The father in me is resisting SO HARD from showing him where the pieces are and/or putting some of them together.  I really want to jump in and help since I also love building legos!

Yet this resistance is key to letting him learn his way.  If I showed him how he would be learning my way.  There is a big difference here.  I would be giving him my programming instead of letting him establish his own programming.

As parents we do this all day long…

We are constantly teaching our children through our current programming because that’s what we know.  Very rarely do we question ourselves and our methods.  We simply tell our children to do it the way we’ve done it, or to see things the way we see them.

So what’s wrong with this?

Nothing.  It’s perfectly fine to live your life this way, and subsequently, guide your child’s life this way.  Most people do this.

However, there is a consequence…

By following this path you are effectively creating mini clones of yourself.  Ever heard or used the phrase, “You’re just like your father.”

Whelp, I have news for you!  It’s no coincidence.  It’s a reflection of DNA and all the programming you were given from your father.  From a young age you observed your father’s actions, took his instructions, and subconsciously replicated much of his behavior.  It makes perfect sense why someone would say that.  You are a cloned version of your father.

Now again, nothing is wrong with this… until…

You wake up at 36 years old as a father yourself and think, “Damn.  I have a serious issue with [fill in the blank].  Where did this come from??”

By now I think you know where it might come from 🙂

To be clear – I’m not saying that all our issues are rooted from our childhood programming.  That would be bold and inaccurate.  However, I am saying that we inherit a lot of subconscious programming from our parents, which in effect, can create issues for us later in life.

Because we didn’t make the choice.  They made it for us.

The key part of this is recognizing choice.

To make a choice is a powerful thing because it represents freedom. I am free when I choose to do something. I consciously decide to do the thing, which allows me to fully own any consequences of that choice.

On the contrary, not having choice represents a form of being controlled. If I never made the decision it becomes very difficult for me to fully own the consequences.

This is paramount to understand because humans are extremely complex.  Our brains have the capacity to learn and process things with perpetual evolution.  With this great power comes equally great side effects.  One simple little idea, for example, can impact the rest of our lives.  One little piece of programming.  That’s all it takes.

Our Role as Parents

As parents we have an important role in our children’s lives since they get most of their programming from us, especially in the early years. In fact, I would argue we have the most important role. We are their primary caretakers and guides as they navigate their own lives.

How much do I want my children to be like me?

Most of us never ask ourselves that and our children end up just like us.  We show them things exactly how we were shown.  We stay grounded in our belief systems, which may come from generations of programming.  We ultimately want them to experience “success” in life and make us proud.

However, by doing this we are effectively handicapping them.

We’re not giving them the freedom to choose.  We’re not letting them fail and experience discomfort, or succeed on their terms, which is where they really learn about themselves.  We’re not allowing them to create their own programming.

From my perspective, our main responsibility as parents is to protect our children. This is what nature recommends. And like a new computer, I think we should give them some basic programming. Some basic tools to help them understand how to make their own decisions and form their own beliefs. Beyond that, I think they should establish most of their own programming.

Don’t get me wrong… this can be a radical concept. Many cultures and societal systems strongly disagree with this. Schools across the world are filled with pre-defined programming, for example. There is value in learning from others’ experiences and lessons, no doubt. However, it still goes back to choice. We’re not giving our youth enough choice when we force programming into their brains. We’re showing them how the world should be instead of letting them see it through their own lens.

I’ve personally battled with this recently as my young children, now 3 and 5, start to make sense of the world. It is not easy. There are times when I’ve dumped my belief systems on them, some of which come straight from my parents. I imagine there will be even more scenarios as they grow into teenagers and young adults. Not helping them from my own experience and beliefs is hard.

However, I’m learning to let go of this.

They need to create their own programming and path, which I will fully support and accept. They need to see the world through their lens, not mine. They will receive my help and guidance any time they ask, but I’m trying to refrain from doing it for them or telling them how it should be done.

It’s time for them to build the legos 🙂

What about you? How much do you want your children to be like you?