The Forgotten Power of Play

I just got back from a week long family vacation to North Carolina.  We spent some time visiting with family, enjoying the beach, and scouting some potential real estate.  This was a great trip overall but one thing really stood out was – the power of play – which I thought would be a great thing to further analyze.

It begs the question – “How often do you play in your life?”

Enjoy this short episode on the power play, and how we can learn from our children 🙂

Welcome back folks, Ali here with another short solo episode. Today we're going to discuss the topic of play. I just got back from a week long family vacation to North Carolina. It was awesome. We spent some time visiting with family, enjoying the beach and scouting some potential real estate there. This was a great trip overall, but one thing that really stood out was the power of play, which I thought would be a great thing to further analyze.

So let's start with a quick definition. What is play? A formal definition is "to engage in activity for enjoyment and recreation rather than a serious or practical purpose." In other words, to do something for fun. Now why is that even important?

Well, I personally think it's important for several reasons. First, it allows us to break from the more serious aspects of life as the definition states, which can be a great pattern interrupt. This is exactly why we take vacations and other recreational trips, to break from our normal serious routines.

Play also gives us inspiration for healthy competition. Sports are a perfect example. They inspire us to give us an organized way to play the game. And they instilled great values around competition, comradery, perseverance, et cetera. Look at how many humans spectate or participate in sports. It's one of the biggest international markets that impacts most people in the world. It's ultimately a universal way for us to play together.

And finally, it's nature's design. Most mammals, including humans have the desire to play and entertain themselves. Look at baby elephants, dolphins, dogs, you name it. Animals love to play from an early age, and most of them sustain play throughout their lives. So it's simply in their nature.

Along those lines, I think there's a lot about play that we can learn from our children. As adults, most of us simply forget how to play. We go through the motions of our serious adult lives, taking on commitments, responsibilities, et cetera. And as a result, we rarely pause to play.

However, children are the exact opposite. They constantly look for opportunities to play. Especially young children like mine who are four and six. This was extremely evident in our recent family vacation. And so I wanted to share a few examples.

The first example is we got in quite late, the first night, our flight arrived at our cousin's well after midnight. And most adults, including myself, would call the date that point and just hit the sack. Get some rest for the next day. Just too tired to do anything else. Right?

Well, not my kids, again, four and six year olds, their cousin was waiting for them and they kick things off right from the start. 1:00 AM in the morning, running around, laughing, screaming, playing right. They had no concept of time. It didn't matter to them. All that mattered was a perfect opportunity to play with cousins they hadn't seen in a while.

Another example is the next day we headed to the Charlotte white water rafting center, which is awesome. Had tons of outdoor activities like kayaking, rock climbing, obstacle courses, mountain biking, and more. The adults, including myself were simply in awe all the well-designed activities and options.

And my mind instinctively goes to a practical, serious logic of like, well, do we have enough time to do this? Do we need to register? Do we have the equipment? Can we rent it? You know how that goes. I was basically calculating how we would set ourselves up for play.

You know what the kids wanted to do? They just wanted to climb on the rocks in the common area. Yes. The basic rocks scattered around the facility, three or four foot boulders that were just nicely designed to be a very generic play area. That was totally enough for them. They didn't even need the obstacle course and some of the other fun things that we ended up doing. In fact, some of them were too intimidating for them. They were completely content just jumping around the rocks in pure play.

A final example is just the gathering of cousins. We were fortunate to spend time with two sets of cousins here, which made seven kids total all between the ages of four and 12. So we had a nice mix. And the two and a half days that they were together was like watching a mini play Olympics. I kid you not.

These kids were bouncing around from activity to activity, changing games, and roles every hour or so. Everything you could think of - tag, family, sports, action figures, dress up, card games, Nintendo, you name it. If there was a toy in that house, it got played with.

They also shifted from front yard to backyard, inside the outside, downstairs to upstairs. They're essentially changing their environment frequently to keep things interesting as they played.

They formed a mini teams where the boys would attack the girls or two of them would split off and dress up to form their own little mini game. And they were grabbing snacks and water on the run as if they were competing in a marathon. It was so fun and cute to watch, like no time to sit down for lunch. We are playing, right.

This was complete chaos. It was also extremely beautiful and organic. As I observed I thought, man, these kids are truly living right now. I could just see the other adults also enjoying in the moment. However, it was clear that there's a sense of this not being for us in a way, right?

Our serious adult ways kicked in. We are like own the spectator role. And then my wife even made the comment, "I wish I had as much energy as them" to which I quickly responded "you do, you've just forgotten how to access it."

And I think that's exactly where all this comes full circle. Even though we know how powerful play can be, we often forget how to do it or how to access it. We've become so serious in our adult lives. We let stress and obligation weigh us down with an endless list of tasks and commitments. We take on so much and simply forget to pause and play.

As a result, we often forget where it all started, which is being a kid and prioritizing play.

I can tell you from recent experience that I'm becoming more intentional about prioritizing play and it's drastically improved my quality of life. For example, I'm chasing and wrestling my kids every day. I'm acting silly at dinnertime with different voices and fun identities. I'm taking advantage of opportunities to play sports and coach my children's leagues. I'm even bringing play into my work with jokes, laughter, healthy humor to just get people to smile more, even in a professional sense. And remember that life doesn't have to be so serious, right? There is room for play.

My wife and I were sitting at the dinner table the other night after a rough day. Both of us were exhausted and drained from all the adult responsibilities we had that particular day. And our kids were still in a very playful mood. They're yelling, giggling, making jokes, et cetera. So much that they weren't even interested in the home cooked meal we prepared.

Now normally this would trigger us and then we try to incentivize them to eat and play games, to get them to just get some food down. But I paused, I let them leave the table and looked at the moment from the outside of my triggered itself. What I saw was two people completely full of energy, my children, and two other people completely depleted of energy, me and Gabrielle, my wife. The difference between us was simply play. My kids naturally knew how to access more energy through play. So I could only help but smile at that point and realize who was learning in that moment. It's beautiful.

So to wrap things up, I want to leave you with a simple question to ask yourself, "how much do you currently play in your life?"

That's it. Until the next time. 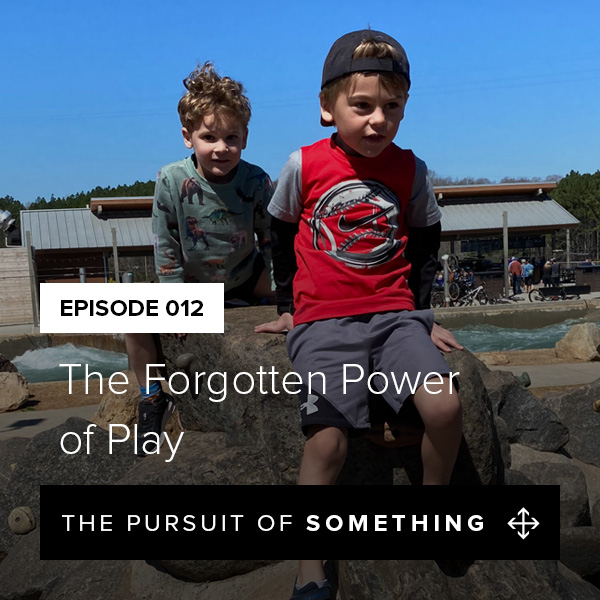 Insights From Adventure with Chris Emick

I’m thrilled to share this new episode with my Colorado brother, Mr. Chris Emick. Chris is a fellow Front Row Dad and native Coloradan who I’ve created a special bond…

Healing Through Humility with Jon Vroman

This is a special episode with a very important guy in my life – Jon Vroman, or “JV” as I like to call him. Jon and I have a very…

New podcast episode with my good friend, Matt Drinkhahn, also known as “The Eternal Optimist.” Matt is a father and husband first, then business coach, who’s redefining what optimism means….